What a great weekend of football it was as the playoffs finally got underway. All four games brought something interesting and each one had some crazy plays for us to feast our eyes on!

Check out the top 5 plays of the week here!

The king of clutch. Wilson sees the snap go way behind him and rather than just sitting on it for a huge loss, he has the presence in mind to pick it up, immediately look downfield, and find the wide-open WR for a huge gain inside the 5. A play that could've been a 15 yard loss turned into a 30 yard gain - that's a game changer.

Jordan Reed has had one of the best seasons of any TE in the league this year and he shows just how talented he is with this great one-handed snag in yesterday's game vs. the Pack. Amazing arm strength to haul it in, then he shows off some quick moves to pick up a few more yards after the catch.

This is the play that got the weekend started - with the first touch of the NFL playoffs, Knile Davis brought back the opening kick off 106 yards for the score! He was never touched - amazing blocking by the Chiefs' special teams!

If you know me, you know I love defense - and Kam Chancellor made one of the plays of the week here. Adrian Peterson is as strong as strong comes, but Chancellor rips the ball right out of his grip and forces the fumble. What a game it was in Minnesota.

Are you kidding me? Bryant comes up with one of the plays of the season as he somehow manages to maintain possession of the ball, flipping upside down and putting it between his legs for the score. What. A. Play.

Which one was your favorite? 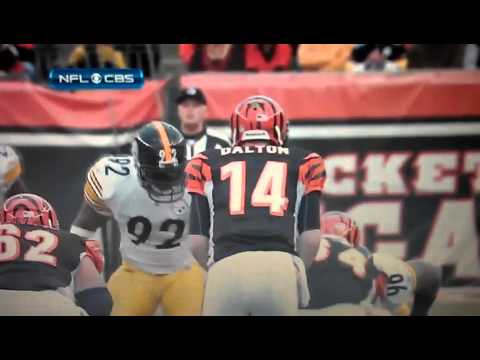 Big Ben: Be Careful With Our Running Back
EightyNine
7
1
3 Browns Shut Down Bengals, Tied for First in Division
EightyNine
6
1
2