Andrew Luck may be one of the weirdest players in the NFL. The Indianapolis Colts quarterback has started to confuse enemy pass rushers not by his impressive play, but by congratulating defenders for hard hits. Andrew Luck's routine on-field praise of opposing players has left Colts foes confused. Luck has become known to dole out "nice play, buddy" and "good hit" kudos almost as often as he finds wide receivers open down the field. Opponents don't know how to handle the compliment. They like to hear smack talk or complaints to the Ref so that they know they are getting to the QB's head. But not with Luck. "I'm like 'what's going on? Aren't you supposed to be mad?' " Philadelphia Eagles defensive back Nolan Carroll told the newspaper. "So then I'm the one who gets ticked off because an upbeat attitude isn't something you see." Does Luck do this intentionally? Maybe but his father said that his son was raised this way. Maybe it's not too late to raise athletes like Luck who enjoy the game and want everyone to play well. It's nice to know that there are still classy guys playing professional sports!

NFL
Sports
IndianapolisColts
EightyNine
It's all about the Bay!
Follow
NFL Dads Tackle Hair Styling In This Pantene Campaign.
danidee
33
8
16 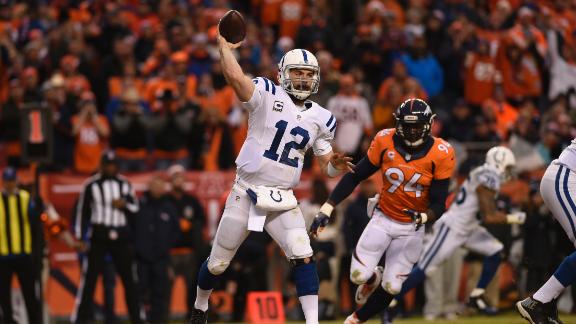 T-Rich Traded to the Colts
EightyNine
9
0
0